It was 4 o’ clock in the evening; we were smelling like incense. After a 3 hour stint with ‘Gods’ in Kashi Vishwanath temple, we ate our meals and headed to the best place of Varanasi – the Ghats. Google maps indicated the estimated arrival at ‘Dashashwamedh ghat’ around 4:35 pm, on foot. Heavy on the taste of ‘Lassi’ & the smell of marigold flowers, we began walking through the wet, slippery and narrow lanes of Varanasi.

The walk to remember:

My mother loves to dress per the occasion.So, she dressed in a cool, Saffron kurta and teamed it up with a cotton churidaar. My sister dressed in Pink and I chose Yellow. With our foreheads smeared with tilaks and wrists covered in auspicious red strings (mauli/ kalava), we looked like a Kirtan Mandali (group of people who chant or sing verses), ready to praise the God in a medley of tones. The odd one out was my father who came dressed like a tourist in his half pants and floral shirt like he is going to a beach of some sort. He was even chanting couplets from ‘Ramayana’ on the way to the Ghat.

We were in Varanasi for two more days. So, I were looking at my mobile & checking out places to visit on Tripadvisor while following my mother. A beautiful town called Renukoot caught my attention when my mother shouted, “Have you lost your mind?”

“Why would I lose my mind? It’s very much there.”

“You almost stepped in cow dung. Keep the phone back in your purse.”

I was about to tell my mother to calm down when my sister intervened and said, “Didi, there are many monkeys menacing here. Keep it back else they will snatch it. You haven’t even paid the EMIs yet.”

I couldn’t click any pictures now. So, I started to look around. There was a procession in a distant lane and I could hear people chanting something when my mother grabbed my hand and literally dragged me for 400 meters. Air got lighter and cooler; the quiet lanes quickly transformed to a busy market. A thin man, clad in blue, with a half smile on his face, was walking towards my father. Doubting his intentions, I started walking in that direction when my sister cheerfully declared, “We reached the Ghats”.

Turned out that the guy was trying to sell a boat ride to us. After frantically bargaining, we settled at INR 1800 for an hour long, personal boat ride which would end with Gangaa Aarti at ‘Dashashwamedh ghat’. My mother, as usual, kept telling me that we have been ripped off & told us to bail on the boatman and find us another ride. When I asked my mother to calm down; she gave me a mean look.

The boat took us from one Ghat to another. Like a movie, every Ghat presented a well scripted and enacted scene. We began with the Ghat where people were bathing and swimming like they were in a pool. A mere dip in the river was supposed to wash away their sins.  However, the bare, unclad bodies did not bother anyone and no amount of constant stares could bring embarrassment to the subject.

I also saw some sadhus (ascetics) busy in their prayers with no clothes on their bodies – smeared with ashes and decorated with colorful beads. A sadhu renounces all the worldly pleasures and devotes their life to Gods. Some of them were advising families on financial and personal problems & the devotees were listening intently, untroubled by the disrobed body of the sadhu. 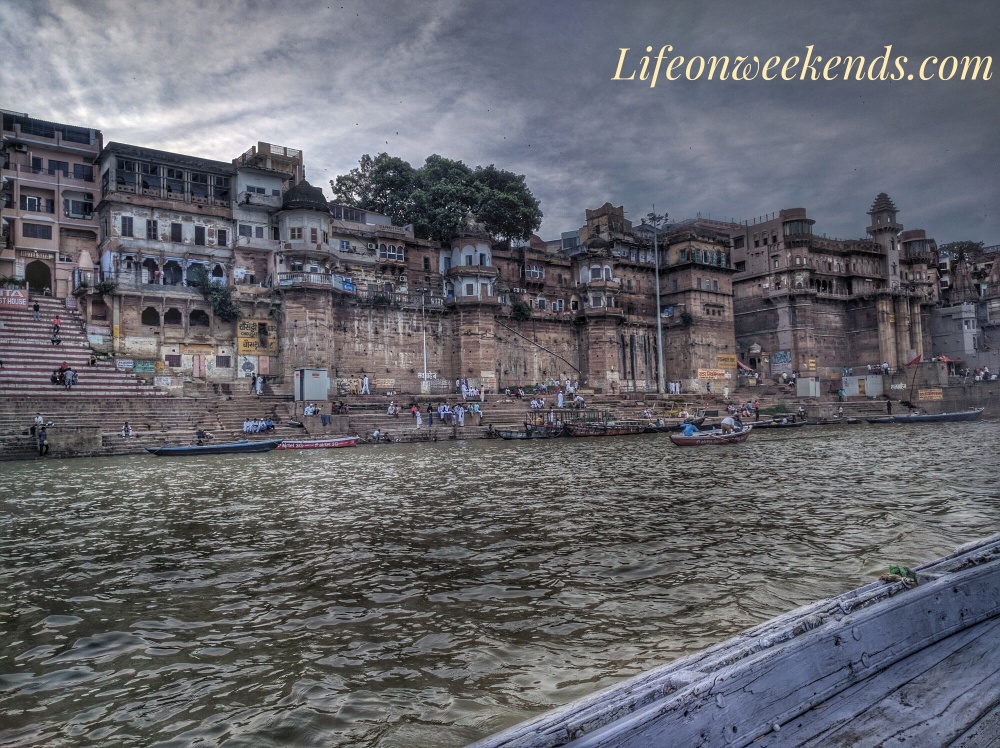 What makes people resort to God or monks/ religion Gurus is a subject in itself. All of us have our own share of insecurities. We all have felt self-conscious at some point in our life. Exposing our vulnerabilities before a deity always seems easy and therapeutic. Prayers, rituals and verses might not solve the actual problem but helps muster the courage to face them.

The boat took a turn and a strong stench came from our right. Those were pyres on Manikarnika ghat.

People come to Kashi (Varanasi) from all cities of the country to spend the last days of their life. A cremation in Varanasi means moksha (salvation) from the cycle of life and death. The family members of the deceased offer prayers and engage in last rites under the guidance of a qualified priest.

In their last moments, people often speak the truth, reveal their innermost desires & no longer care. They feel vulnerable but seem alright. They remember the God in hopes of a better life after death. 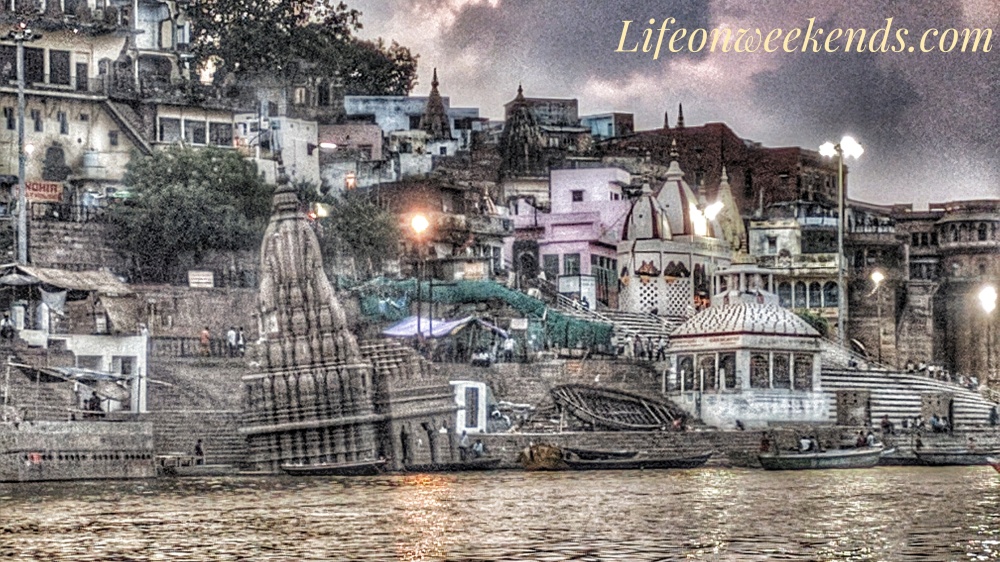 We  neared the Dashashwamedh Ghat for evening Aarti was about to begin. My sister was trying to dip her hand in the river and father was busy chatting with the boat man. Mother was looking in the river & a sense of calmness prevailed on her ever-tensed face. I left my spot and sat next to her, clicking some pictures.

The people I love the most were sitting in front of me enjoying the evening  – chatting, splashing water and looking calm.