Kerala – home to yummilicious food, green coconut trees, sapphire-blue beaches & sea life. There’s just so much in God’s own country to explore and experience that one or two trips will never suffice.

In our recent trip to Kovalam beach , we encountered something new. Kovalam beach is gorgeous. It’s one of the most beautiful beaches in India where the water is so clear that you may see yourself in it. The Sunrise and Sunsets are out of this world. And the food – oh my! the best sea food that you will ever have.

We stayed by the beach which is why we used to go for early morning walks on the beach. In one such walk, we saw a group of people, in a circle and making noise. It appeared as if someone was inside the circle and these people were trying to shoo it away. When we reached there, we saw a group of fishermen, analyzing their catch for the day & straightening the fishing net. I thought to carry on with my walk when I saw them throw something in the water. Upon looking closely, I identified this little beast – it was the puffer fish.

I loved this imp so much. The fish was so lazy that it just stayed on the beach – silent and static. No plans to move anywhere. She had nowhere to go, nothing to do, no one to answer to. It was just her day. And she seized it well – just by lying there, rolling to and fro with the waves and hitting the shores as the waves receded.

I was thinking how to befriend this little alter soul of mine when a man came out of nowhere and picked the lady just to have a picture clicked with her. And that’s when our puffer fish really went the puffery way & bloated like a balloon.

And it was not just this one, there were many of them who roamed about freely – on the beach like they had no care in the world like this eel: 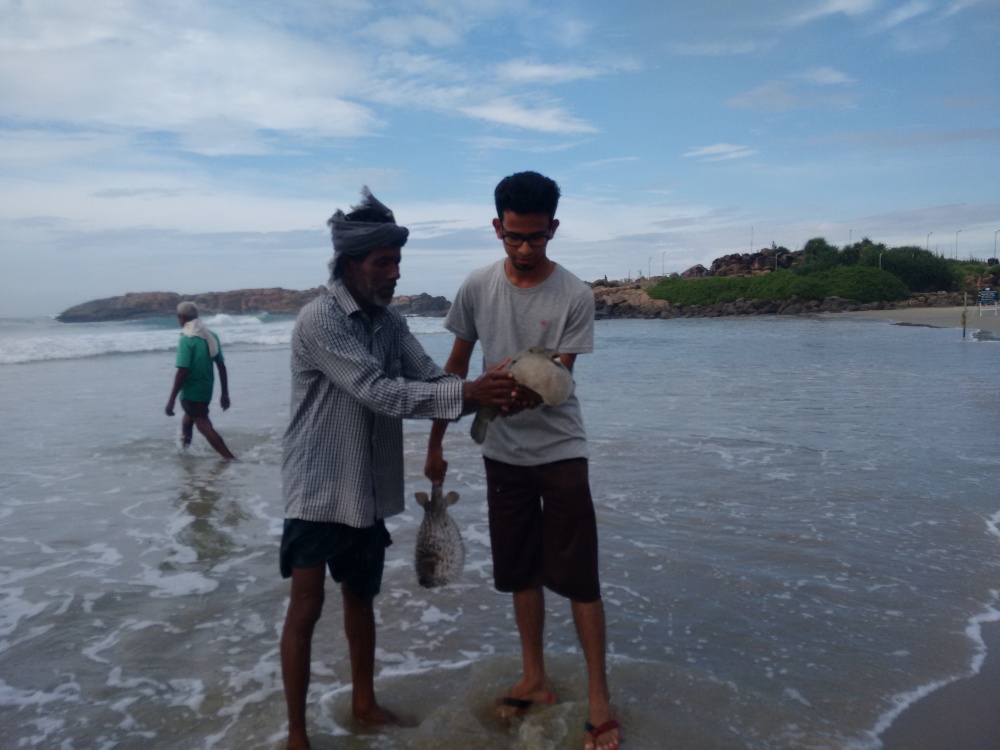 The show went on for an hour. People continued to spot many such sea animals/ creatures who accidentally or knowingly came to the beach. Some of them were clicked and some of them were thrown back to the sea. But me! I was hooked on to the puffer fish who was hell bent on taking her sun bath and had no plans of leaving the beach without a good tan.

Loved her! Wish I could take her home.

Have you ever been to a beach where the sea life went about their business so freely? If yes, let me know. By the way, Puffer fish are poisonous and you are not supposed to touch them let alone eating.